Henna is a plant that produces so-called Lavson reddish in its leaves, which is used for natural herbal hair dyeing. To get different colour shades of hair, it is perfectly combined with other herbal hair colours such as INDIGO, SENNA, AMLA and HIBISCUS.

– Give the shine to the hair

– Prevents the formation of dandruff on the scalp

– Has a cooling effect on the scalp

The organic henna for hair is the most natural and effective hair dye.

The young leaves of the henna are washed and dried, then ground into powder with special mills. Then the powder is mixed together with water, prepared in a yoghurt-like mixture, which is applied to the hair or to the scalp.

For example in combination with SENA and INDIGO gives henna various shades of brown. The addition of AMLE and INDIGO to the henna gives different hair shades without red pigment. On the other hand, a more intense red shade of hair is achieved by adding hibiscus to the henna.

Note: The organic and natural henna contains only orange-red colour, so be careful when someone offers you so-called »commercially colourful henna« and promises you different shades than red or orange.

A quality organic henna + proper application procedure permanently covers grey hair and does not rinse out of the hair.

Mix henna powder with water in ration 1 powder: 3 water. You can add app. 10 ml of lemon juice (if you are using henna with INDIGO, do not add lemon juice). Leave the paste in a tightly closed container at a room temperature for the next 24 hours.  Apply henna on clean and dry hair the following day. Wrap the head in a transparent plastic foil for the next 4 hours.  Then wash and dry your hair.

Note: The powder should not be mixed with hot water above 42 ° C. The final hair color will develop 48 hours after dying.

About henna and the hair

About henna and the hair

How does henna dye hair?

Henna or Lawsonia Inermis unlike chemical hair colours, does not open the hair and therefore does not damage the structure of the hair. On the contrary, henna also has healing abilities on scalp and hair. The two figures below illustrate the cross-section of the hair and the hair stalk and the henna function on the stalk. 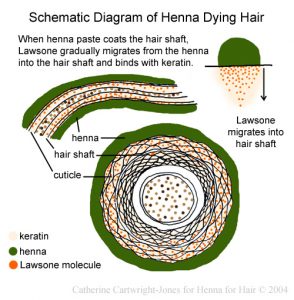 Henna is dying, nourishing and also protecting your hair. When applied to the hair, the lavson slowly penetrates into the stem of the hair, where it binds with keratin. As long as it is left to effect on the hair, the more intense reddish colour is achieved.

In the Western part, henna is known primarily as a natural dye. In Europe and America, it became popular in the 19th century, when English archaeologists began to explore Egyptian pyramids. They found that ancient Egyptians were dying hair and body, wool, leather and fabrics with henna. In the west, henna painting became synonymous with oriental seduction and attraction. Egyptian merchants traded a lot with henna, but in order to offer the westerns the most intense colour, metal salts and other chemicals were added to the henna powder and that may cause severe allergies on the skin.  As a consequence, the henna was given a bad reputation, and rumours spread that it was even harmful to the scalp and hair, which are of course not true. Organic natural henna without impurity has healing power for hair and scalp, and among the others, it eliminates a headache and hair loss.

Henna young plant leaves contain in addition to various fatty acids also tannins and so-called pigment “lavson”. How much lavson is in leaves depends on the quality of the soil, where the plant grows and from climatic conditions (minimum 25ºC). That’s why we know several different henna qualities. The most well-known areas of henna are in Morocco, Yemen, Pakistan and some parts of India.

The young plant leaves of the henna are washed and dried and then grounded into powder. Henna is harvested once a year. Leaves must be quickly dried, similar to that of tea tree leaves. Dried leaves are ground in powder, which is still sifted after grinding. Three times sifted powder is really fine powder and belongs to body-art quality – this is the best quality of henna powder, free from impurities and is also used for painting the skin with henna-Mehndi.

Traditionally, all parts of the plant are used for various purposes.

The roots have a bitter taste and have a cooling, cleaning purpose in a body. It also drains water out of the body, stimulates menstruation and triggers a break in pregnancy. They are used in burns of skin diseases, regulation of menstrual bleeding and against leprosy.

The leaves are also of bitter taste and act as astringent (tissue or veins), coolant, diuretic, accelerate the secretion of mucus from the lungs, bronchi and trachea, they act anti-inflammatory, reduce fever and strengthen the liver. They are used for wounds, ulcers, burns, inflammation, baldness, throat inflammation, swelling of the swelling, leprosy, skin infections, fungal diseases, bacterial infections of hair follicles, regulation of menstrual bleeding, fever, eye inflammation, irregular periods, spleen and problems with urinating.

The henna flower has a strong and pleasant smell. The flowers have an invigorating narcotic character, and they work very effectively for the heart and nervous system.

In the Middle Ages, pillars were filled with henna against insomnia.

The henna flower is used as attar (a perfume made according to the old Iranian method) against a headache, insomnia and reconciliation.  Henna flower attar is also used against the moths in woollen products.

Barks of the steams are used to normalize liver and spleen and to treat jaundice.

The fruit called “KAMARACAS” has been enhanced and has high nutritional value. It is used in geriatrics.

Spiritual and social symbolism of the henna

Henna at the spiritual level symbolizes the blessing and unleashes the evil spirits. Therefore, the painting of the body with its colouring gratitude to the universe or god for all the gifts that have been or will still be received. It was precisely because of this social and spiritual expression of gratitude or a request for happiness in the future that a simple technique of painting was developed first, and from this on it was evolved to a modern art.

In the therapeutic painting, each character has a certain meaning and expresses the desire in which personal area the individual wants blessings. This art is called Mehndi and is best known to us as a wedding party in an Indian wedding. In Morocco, women in the 7th month of pregnancy paint their ankles, asking for protection of themselves and the child during their birth. Widows paint a symbol of mourning to communicate with their neighbours their emotional state. But when the family needs more happiness, women are treated with henna and with that gesture they invite happiness to their home. They also paint animals to be healthy and to serve them well.

Recently, with more antibiotics that are not effective in eliminating viruses, scientists in India and some African countries have been intensively engaged in the scientific research of Lawsonie inermis.

This interest has increased due to proven antiviral and antimicrobial activity. In addition to these two activities, scientists are also studying the operation of henna in burns and Melanoma (a dangerous skin cancer). The first findings confirm the indication of the effects of henna, which are described in the old medical records. For more detailed and well-grounded research, however, we need time, but more and more indication is coming that henna is also the PLAN OF THE FUTURE not only of the past. This is especially true when big pharmaceutical giants have no more satisfactory answers to the modern human diseases.

Now you are probably more aware of advantages of natural dying and hair care rituals for your hair.

Organic Henna powder should be stored in a sealed bag in a dark and dry place. The maximum use of henna powder in a proper storage area is 2 years after grinding. Fresh henna has a smell of hay and it must have a yellowish green to olive green colour. When traders offer you henna in different colours, this means that additives, most often metallic salts, are already added to the henna. These additives may be harmful and toxic to our organism and cause skin reactions. As so-called colourless henna, they usually offer SENA powder (Casia auriculata). 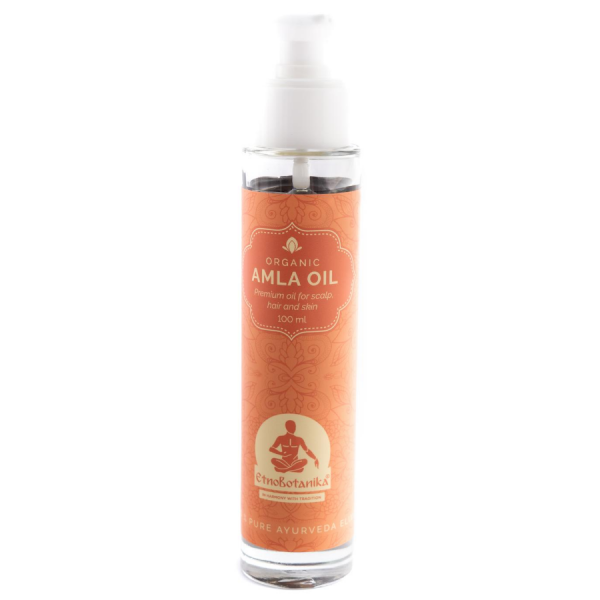